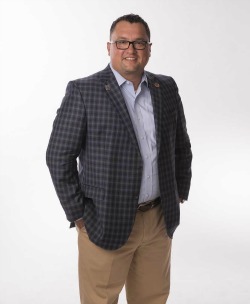 2017 SMAOR Realtor of the Year

Clifford began his local Real Estate career with Century 21 Hometown Realty where he was named “Rookie of the Year 2004” for all seven offices in only six months of work. He followed that year up with being named “Top Overall Producer 2005” for the Orcutt office. It was during the middle of 2006 that Clifford moved his business to Era Polly Real Estate. Clifford always laughs and states that, “the best Real Estate deal he has done to date was signing on to work with Era Polly.”

Clifford is a fourth generation native to Santa Maria and graduated from St Joseph High School. He has resided in Santa Barbara County for the majority of his life except when he went to get his College education in Public Relations and Real Estate Land Use. Clifford enjoys giving back to the community by coaching his three kids and others in local youth sports. Clifford thrives as a problem solver and does what it takes to get deals done.

If you are seeking the highest quality of service and knowledge, Clifford is your type of Realtor.